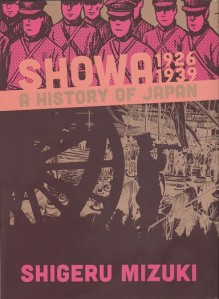 SHIGERU Mizuki’s historical manga Showa 1926-1939 tells two parallel stories. One is a story about Japan insatiably hungering for the rule of Asia. The other one is a story about Mizuki and his near ones coping in the turmoil of history.

As the Americans see it, the Second World War started with the Japanese attack on Pearl Harbor in December 1941. As the Europeans see it, the war officially began in September 1939 when Britain and France declared war against Germany, who had invaded Poland.

In Europe the First World War led to the Second. Similarly, the Japanese were preparing and waging war already long before 1939. Japan had been in war with China already in 1894-1895. The purpose of the war against the Qing Dynasty was above all to win rule of Korea. A multi-staged history of war followed, and the militarizing Japan seeked the domination of the whole of Asia. Japan eventually allied with Nazi Germany, even though practically the only common cause was a desire to defeat the Soviet Union.

Kodansha published Shigeru Mizuki’s (1922- ) historical manga Showa (コミック 昭和 史, Komikku Showa-shi, ”A Cartoon History of the Showa Period”), initially in Japan as eight paperback books in 1988. It immediately won the company’s award for the best manga of the year. Unlike most manga, this story was never published in any manga magazine.

The manga’s name comes from the Japanese Showa Period (昭和, ”enlightened harmony”), which refers to emperor Showa’s administration from December 1926 to January 1989. During his lifetime the emperor was known as Hirohito. Showa was the longest and most troubled reign of modern Japanese history. Since 1989, Japan has lived the Heisei Period under emperor Akihito’s rule.

Drawn & Quarterly has now begun the publication of this manga in English, in a translation by Zack Davisson. The series will be reorganized into four hefty tomes, each of them about 500 pages long. The just completed  first part Showa 1926-1939 tells what happened in Japan before the Second World War (as Europeans know it). It ends with general Hideki Tojo returning from China into the Japanese government.

SHIGERU Mizuki’s manga Showa is both rugged and fun. It has a large amount of material about Japanese history, arranged almost like a school textbook. It is also rich in ideas and personal description on how Japan’s history was seen by a little boy and his loved ones.

Although the manga is named as to tell the history of the Showa Period, it begins a little before Showa with the great earthquake of Kanto in 1923. The quake demolished badly Tokyo and killed more than a hundred thousand people.

Before the earthquake, during the regime of Emperor Taisho, Japan had had a short flowering of democracy and freedom, which actually only reached the middle class. Shigeru Mizuki compares it with the American roaring twenties.

After the Kanto quake Japan was devastated by a series of depressions, which drove a large part of the population into poverty. The first home-made banking crisis was in 1927. In the early 1930s, the situation grew worse in the after shocks of the U.S. stock crash.

In particular, the rural population suffered, but the effects extended to all classes. In Mizuki’s family, mother’s prosperous background in the samurai class was now just a memory. The family’s weak father was repeatedly left unemployed, and he was away from home a lot.

Shigeru Mizuki’s own childhood was a series of rather rough boys’ games. The boys from different parts of Sakaiminato fought their own wars, and they admired Japanese army generals. Mizuki was not much interested in school. Collecting insects, eating donuts or listening to granny NonNonBa’s ghost stories was much more fun.

Mizuki’s childhood stories are largely familiar to those who have read Mizuki’s autobiographical manga NonNonBa, which Drawn & Quarterly recently published in English. 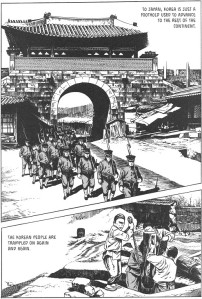 IN MILITARY history, Mizuki’s main focus is on how the Japanese army systematically orchestrated the war. The army began to live its own independent life, regardless of the civilian administration – and even against it. The army staged attacks and murders even against their own. The purpose was to put right people in the Japanese government, and to find excuses for placement of troops in Asia.

The leading idea behind Japanese warfare was ”Asia for Asians”. The Japanese army held the view that,  rather than a number of European colonies and vassals, Asia should be a uniform Asian entity. The obvious ruler and manager of the entity was of course Japan.

Japan presented its military operations as ”incidents”, small one-time events, where Japan only reacted when necessary. Japanese troops went to the Asian continent ”to take care of transportation” or ”to protect Japanese citizens” who felt insecure. This was done to prevent at all cost the Western powers from interfering.

One of the most successful for Japan was the ”Mukden incident”. In it troops actually obeying Japan blew up in Manchuria the railway which was the main artery of Japan’s continental businesses. This gave Japan an excuse to capture the whole of Manchurian.

Probably the most horrifying ”incident” happened after the occupation of the Chinese city of Nanjing in 1937. Later historians know it as the Nanjing Massacre. In six weeks, Japanese troops killed an huge number of men, women and children. Estimates of the number of victims range from one hundred thousand to three hundred thousand.

Meanwhile in Japan, the army grabbled more and more power. First, the communists were persecuted. Before long, anything sounding even slightly liberal was forbidden.

The childhood stories are more cartoon-like.

THE MANGA Showa is not an easy read. It is teeming with names, places and events of Japanese history. But as Frederik L. Shodt writes in his Foreword, when you get the rhythm of the text, you can cope with the multitude of historical facts.

I must admit that I sometimes scorn the habit of placing large amounts of translator’s notes in the end of English mangas. In this case, the notes are truly wellcome. Drawn & Quarterly presents brief descriptions of all key persons, as well as explanations of a number of difficult concepts and important events. Even more of it would have been nice.

Putting Nezumi Otoko (Ratman) to comment the war events is a marvellous idea from Mizuki. Half-man, half-youkai Ratman is familiar from the Kitaro manga and anime, where he is a mischievous friend of Kitaro. His laconic commentary  probably corresponds fairly well with Shigeru Mizuki’s own thoughts.

The two different stories of the manga differ not only in content, but also in the style of the drawings. Description of war is very realistic, sometimes downright shocking. As Mizuki was himself deeply involved in war, he is the right person to draw them. As background of the artwork, dozens of authentic historical photographs have been cleverly used.

In Mizuki’s own family history, drawings have been carried out in the same style as in NonNonBa. On realistic backgrounds, cartoon-like people are portrayed. Thus, for example, the different personalities of the young boys come out brilliantly, as well as the slovenliness of Mizuki’s father.

The ambivalent style takes some getting used to. Especially if you have learned to expect manga to obey the current visual conventions of shoujo or shounen. In this respect, Mizuki has always folowed his own paths.

Mizuki has used a lot of authentic photographs. Here is a photo of the ” oriental Mata Hari” Yoshiko Kawashima. 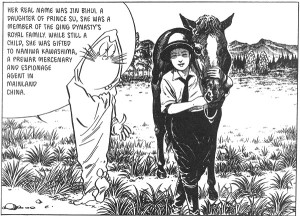 And here is Mizuki’s drawing on the same subject.

DRAWN & Quarterly has brought to the English reading audience a good variety of Shigeru Mizuki’s manga about war and personal history. Thus, the most significant surviving manga artist is beginning to get proper respect in the consciousness of Western readers.

In 2011 Onward Towards Our Noble Deaths (Souin gyokusai Seyo!) appeared. Last year the childhood description NonNonBa was published. This year we got a fine collection of the classic adventures of the ghost boy Kitaro. Three more tomes of Showa are hopefully coming soon.

Osamu Tezuka made his most ambitious work Hi no tori (Phoenix) to embrace the all of human history. Similarly, Showa, embrasing the modern Japanese history, is certainly one of the most important works by Shigeru Mizuki.

Maybe this would be the proper time to translate something alltogether different from Mizuki’s works?  For example, the boys’ ghost manga Kasei nendaiki (”Martian Chronicles”) from 1962. Or maybe the first appearance of ”Daddy Eyeball” in the manga Jigoku no mizu ( ”Water from Hell”), published in 1958.

Another example of a photograph. The man on the left is the Japanese spy Shintaro Nakamura. 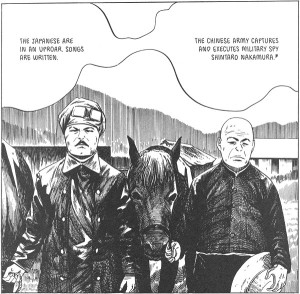 And Mizuki’s drawing of the same man.